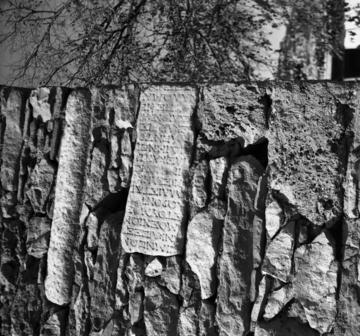 An inscription embedded in a wall at Gözler, close to the ancient site of Hierapolis

Maurice Antony Byrne 1940-2016  was born in Edgbaston, a suburb of Birmingham, the eldest son of a financial director of a steel company. He studied inorganic chemistry at Exeter College, Oxford, where he also took his DPhil, before going on to pursue his interests in archaeology, science and music. Perhaps most famously, he worked on Greek incendiary techniques ('Greek Fire'!) whose secret had been lost with the fall of the Byzantine Empire in 1453. Byrne helped to develop a theory of how Greek naval fire was projected and how it had remained flaming on the surface of the water. He also became an expert on the coinage of Phrygian Apameia, which was minted between 133BC and 48 BC and used for everyday transactions in the eastern reaches of the Roman empire. A man of independent means he never held an academic post, but he was a good collaborator and worked with established academics with whom he published several scholarly papers. Together with Guy Labarre he published updated editions of the inscriptions of Pisidian Antioch (modern Yalvaç) based on the notebooks of W.M Ramsay. Towards the end of his life, he spent several years living in Gözler, a small village close to the ancient site of Hierapolis, compiling notes on the inscriptions and architectural blocks that surrounded him. The CSAD holds an archive of his squeezes, photographs, notes and notebooks.