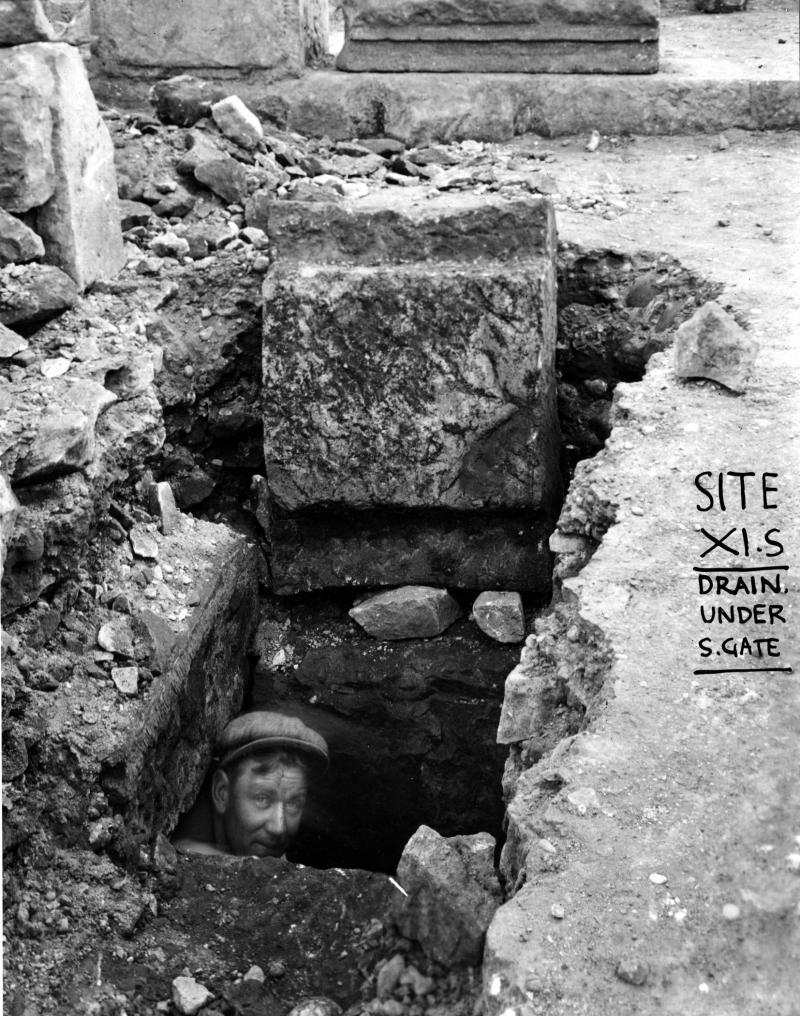 A workman clears out the main drain under the entrance to Site 11 at Corbridge in Northumberland (1910).

The ancient historian and archaeologist, Francis J. Haverfield (1860-1919), studied at Winchester College, Oxford University, as well as under the German classicist Theodor Mommsen, widely regarded as the greatest classical scholar of the 19th century. A specialist in Roman epigraphy, Haverfield was a pioneer in the field of Romano-British archaeology, and one of the first scholars to address the issue of Romanization. In 1914, he began to publish annual surveys of the Roman inscriptions of Britain and initiated the monumental project to create published editions of the entire corpus inscriptions found in Britain from the Roman period.

The material he collected was later edited and published by his pupil, R.G. Collingwood, together witrh R. P. Wright in 1965 as RIB Volume I, and a new edition was published in 1995 with an addendum by R.S.O. Tomlin. 1995 also saw the publication of RIB Volume II, containing the scholarly editions of all Roman inscriptions on instrumentum domesticum, supplied by R.G. Collingwood and R.P. Wright (edited by S.S. Frere and R.S.O. Tomlin). RIB Volume III, contains the corpus of lapidary inscriptions discovered after the closing date of Volume I through to the 31st December 2006.

The CSAD holds a substantial body of material relating to this project, including: 2 of Haverfield’s photographic albums; the majority of the squeezes and contact drawings used to prepare Volume I; 29 epigraphic notebooks and some field notebooks belonging to R.G. Collingwood; the papers and notebooks of Sheppard Frere and the R.S.O Tomlin digital archives of photographic images, as well as the technical drawings and squeezes relating to RIB Vol III.

A new, online epidoc database of the corpus of Roman Inscriptions of Britain, including any relevant addenda and corrigenda published in the Journal of Roman Studies and Britannia, as well as new material from Vindolanda and the Bloomberg site, is being completed by Scott Vanderbilt as part of the LatinNow project. It will be hosted by the CSAD and will go live on April 10th 2019.